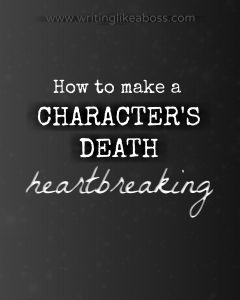 I’ll be honest with you – a majority of the people who read my books tell me these same things: “Why did so-and-so have to die?!” “Noooo, how dare you kill off so-and-so!”

It’s a pattern. And I’ve started to take notice of it.

I wonder to myself, What exactly makes my characters’ deaths sad? How am I hurting my readers?

And I came to an exciting answer – a few, actually – which I have written below. I’m hoping this helps you, and perhaps even inspires you, during your writing and revision processes! 🙂

~ Make the reader love him.

Actually, I realized this a few years ago: if you want a character’s death to affect the reader, the reader needs to have established a bond with him already.

[Abundant spoilers] Here’s an example – how about Newt from The Maze Runner? Or Rue from The Hunger Games? Or, if I dare even go there, Tris from Divergent? Each of those characters were, in one way or another, attractive to the reader before their time came – Newt protected his friends and showed great loyalty to them (and he was British, which is an instant plus). Rue was the youngest tribute in the 74th Hunger Games – which make her an automatically pitiful character, from a reader’s standpoint – and she showed kindness to and helped Katniss. Tris was selfless and cared about her peers.

Killing off a character before the reader has time to connect with him is rarely a good idea – no matter how it happened, or how the other characters react, the whole situation will seem cold to the reader. However, there are exceptions! If you’re writing a murder mystery or the character in question isn’t relevant to anything (i.e. nameless background characters dying in battle), then you don’t have to worry about securing a bond. 🙂

(Hint: if your protagonist loves a character, it’s hard for the reader to not love him, too!)

Fact: sometimes your characters’ reaction to a loved one’s death is sadder than the death itself.

[More spoilers] I have more examples, and it’s The Hunger Games: Mockingjay. It isn’t Prim’s death in itself that broke the reader’s heart, but instead Katniss’ angry, tearful reaction when she told Buttercup the cat.

The reactions of the deceased’s peers can, and should, complete the scene. Think about his parents’ response to his death, his siblings, his best friend, his lover … etc.

I know I keep using the same examples, but I’m referencing Newt again. When he found out he had the Flare, he didn’t fight it – he got important things done, and when the time came, he welcomed death like an old friend.

~ Give him something to live for.

Every character needs goals, there are no exceptions. If he has a valid reason to keep fighting, then the reader can connect with him more – these are the basics of character building.

If you want your character to die a fulfilling and complete death, be sure that he’s accomplished his main goal first. But if you feel the need to totally break your reader’s heart (which you probably do, if you clicked this article), let that goal go unfinished. Cruel, isn’t it?

I wrote a book a few months ago in which my MC killed her “love interest” to protect her friend. One of my friends read that book, and she told me how heartbreaking it was that I decided to do that. (Edit: She also said it was the best book of mine that she’s read, so it isn’t like my choice to do that totally ruined the book for her.)

Letting your protagonist kill the other main characters isn’t something I recommend you do often, but every once in a while it works as a huge plot twist (if you play your cards right). Or you could do it for some character development, like when Tris shot Will and it affected her for the rest of the series.

9 thoughts on “How to Make a Character’s Death *Heartbreaking*”