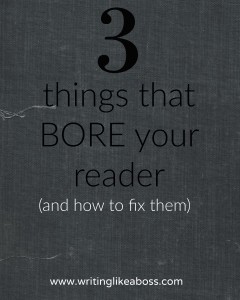 When a reader gets bored, he closes the book. It happened to me just last night, when I was reading The Lightning Thief. That fight between Percy J. and Ares was really, really boring (which I will bring up again later). It’s disappointing from an author as great as Rick Riordan.

As a writer, I know it is difficult to keep the action going. Especially because I’m totally cool with characters just wandering around aimlessly and sharing weird dialogue instead of actually pursuing their goals. (That’s kind of a no-no, by the way. I actually do very few things right when I’m writing, but that’s what editing is for.)

These are the main things that make me close a book. Keep them in mind as you write your stories:

1. Too Many Words
[ Spoilers for Percy Jackson: The Lightning Thief ]
Too many unnecessary words makes your story drag out, and your reader will space out on what is actually happening. This is especially frustrating in action scenes, which brings me back to my point on Percy Jackson:

“I could see where Ares was tensing. I could tell which way he would strike. At the same time, I was aware of Annabeth and Grover, thirty feet to my left. I saw a second cop car pulling up, siren wailing. Spectators, people who had been wandering the streets because of the earthquake, were starting to gather. Among the crowd, I thought I saw a few who were walking with the strange, trotting gait of disguised satyrs. There were shimmering forms of spirits, too, as if the dead had risen from Hades to watch the battle. I heard the flap of leathery wings circling somewhere above.”
– The Lightning Thief, p.g. 328

That was one paragraph in the middle of Percy’s fight with Ares. As you can tell, it’s a long paragraph. And guess what doesn’t happen in it? Fighting! This is supposed to be an action-packed fight to the death! There absolutely should not be a paragraph that long without actual battle.

Also, did you notice slowly that paragraph moved along? Don’t get me wrong, Rick Riordan is an amazing writer, but he really would have improved this scene by cutting some words; maybe even entire sentences.

My point is, action scenes should be simple and straight to the point. The readers don’t want to know how much your protagonist is bleeding from his bullet wound, or the “beads of sweat” on his opponent’s face. While details are nice, your character isn’t likely to notice them if this fight scene is legitimate. I, myself, prefer simpler writing that is straightforward. I think my favorite style I have found so far is Veronica Roth’s, but that’s just my opinion. You should write however you want to write.

2. Nothing is Happening / Plot won’t get Started
[ Spoilers for The Hunger Games ]
If you go too long without anything exciting happening, your readers will get very, very bored. This seems obvious at first, but avoiding it is harder than you think.

The Hunger Games is an excellent example of fast-paced action that never dulls. Prim gets reaped in chapter one. Katniss volunteers for her in chapter two. That, my friend, is how you should do it. Who wants to put the book down after that?

However, this doesn’t ensure you for the rest of the book. I read a book once that had its action jump-started in the first chapter, but after chapter seven or so it got indescribably dull. To make it worse, the author included a chapter from the antagonist’s POV, which was also boring and didn’t really give you any important info. I stopped reading it and haven’t picked it up since.

Try ending each chapter with a good, relevant cliffhanger. Not by adding tons of subplots – that’ll just confuse the reader. Hence why I used the word relevant – cliffhangers that are relevant to the main plot. If you need examples, The Maze Runner is a great one.

3. Boring Characters
If your characters have any of these following points, you should consider making some changes.

I can probably think of more, but everyone in my house is being too loud for me to focus, and I have to go to the airport soon. I hope this helped you guys, and have a great week!(: