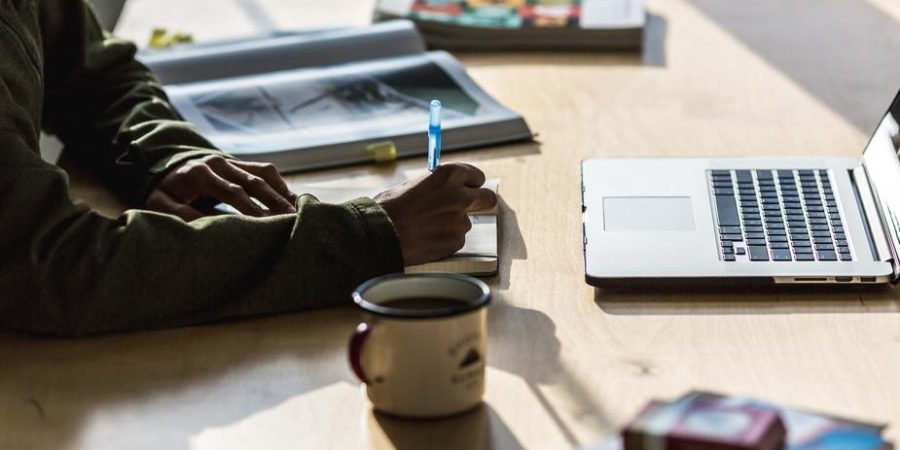 So here’s a whopping 100 prompts that are definitely, without a doubt, not boring. Trust me on this one, I did a quality test and removed the boring prompts.

I encourage you to add your own twists to the prompts to really make them your own!

So just scroll down if you want a specific prompt! 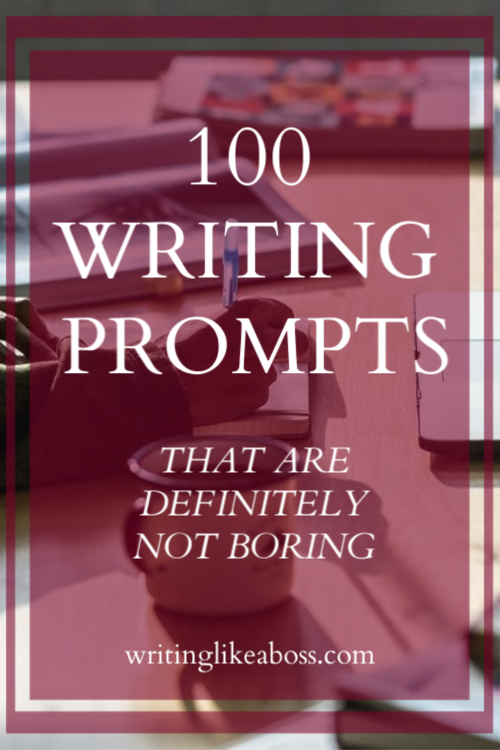 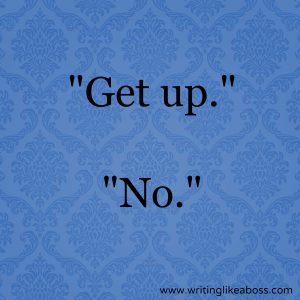 “You have a visitor.” 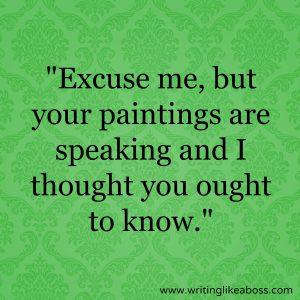 “Hey, don’t throw that paperweight! WHAT DID I JUST SAY?”

“I’ve always wanted to take a shower in a waterfall.”

“Excuse me, but your paintings are speaking and I felt you ought to know.”

“I thought I told you to STOP THROWING THE PAPERWEIGHT!” 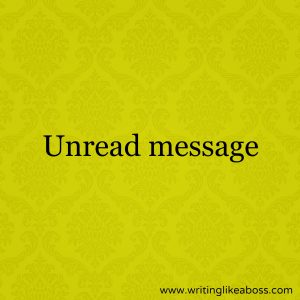 “Your highness, we have carried out the order. The king is dead.”

Modern-day witches keep their potions in Tupperware containers with the potion’s use scribbled on the lid in Sharpie. 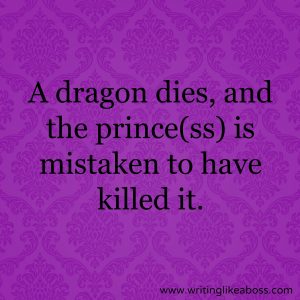 “Well, call me crazy, but I swear there’s a unicorn on my scanners.”

But – I couldn’t possibly be one of . . . one of them. Mermaids aren’t real. (Replace “mermaids” with your favorite mystical being.)

A dragon dies, and the prince(ss) is mistaken by his/her kingdom to have killed it.

Cloaks of Invisibility have been growing in popularity, which means more crimes are going unnoticed and people are claiming to have “lost” their loved ones who wear a Cloak.

There’s a monster under your bed. You feed it every night, and in return he protects you from the shadows.

One could scarcely tell it was daytime, what with all the dragons blotting out the sky . . .

The king and queen pass away. There is no other royal family other than the prince, a ten-year-old boy, so the kingdom had no choice but to choose someone from a neighboring kingdom to take control until the prince comes of age. The prince marries and passes away soon after, telling his princess that she has every right to the kingdom, so she waits patiently until she comes of age. The problem? The current leader refuses to give it over to her.

Art and time can no longer coexist. (Ex: you cannot depict time in your books or music.)

You live in a world where there are no natural water sources, and everyone has to drink machine-generated water.

The government has discovered a new planet in your solar system. The catch is, it’s the largest planet ever discovered, and it somehow went unnoticed for all these years. 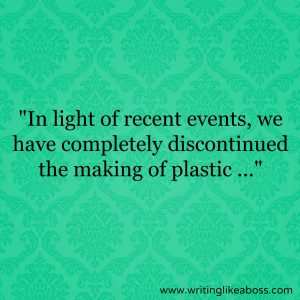 Aliens invade earth. Everyone is ready – they’ve been expecting this for centuries. But when the aliens land, they have only one thing to say: “We’ve come home.”

World War III begins, but no one in your county realizes it until three years later. Why?

“In light of recent events, we have completely discontinued the making of plastic . . .”

A new type of coffee hits the stores, that allows the drinker to unknowingly slip into a daze until stress subsides. (“Overworked? Stressed? Tired? Try StressAway™, your new favorite coffee!”)

Marriage is proved to be the greatest source of stress, debt, and mental issues. A movement has started with one mission: make marriage illegal. You’re part of the movement.

When the clock struck midnight, the beginning of a new year, everyone on earth went blind. Except you.

His roses grew no longer, choked by the smoke that hung like a cloud over the city. Interestingly enough, he didn’t care; he had other things to worry about.

There were feathers on the ground and not a bird in sight.

The cat dish was overflowing. The old man did not own a cat. 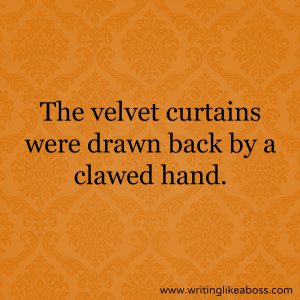 The only thing that calmed the monster: music.

Suddenly, the words leapt off the page . . .

The velvet curtains were drawn back by a clawed hand.

Why bother purchasing an umbrella when it isn’t raining at all?

She was beautiful, that figurine in the glass ball.

Makeup can hide a lot of things; you can tell a lot about a person by the amount of makeup they wear.

Tea has never been my favorite, but yet a fresh cup showed up on my doorstep every morning.

A spring wedding on the day of a storm. The bride walks down the aisle in galoshes, and the priest holds an umbrella over the couple.

“Hey, you don’t know me, but you pick my flowers everything Saturday. Who’s so special that you feel the need to uproot my tulips?” 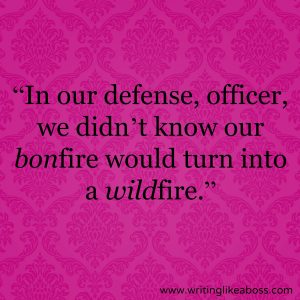 The city has announced a major drought. The whole neighborhood lounges at your place, because you have a ton of fans and it’s hot out there!

A little boy opens a lemonade stand to raise money for his dog’s surgery.

“In our defense, officer, we didn’t know our bonfire would turn into a wildfire.”

Yet another group of trick-or-treaters shows up at your door. Once the kids have their candy, a parent says, “I love your witch costume.” You smile, “It isn’t a costume.”

“Your tree keeps leaving leaves in my yard.” — “Oh, I’m sorry. I’ll just uproot my tree and move it to the other side of the yard so that a few little leaves don’t drift over the fence. So sorry that my leaves upset you.”

You and the neighbor have upheld an unspoken Christmas lights competition for years now.

“Are you aware that it’s October? Then why are you selling Christmas decorations? Okay, may I speak to your manager?”

Rewrite the story of Santa Claus.

The villain has been manipulating your main character’s thoughts and actions for months now. 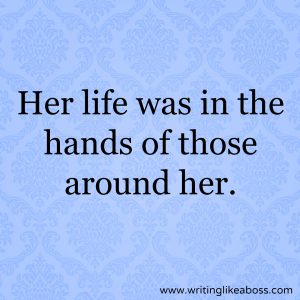 Home base is destroyed.

Everything went wrong the moment the previous book ended . . .

The main character’s life is in the hands of those around her.

Bring back a character that died/left the previous book within the first chapters.

A rescue mission. (Note: this normally works best if the person being rescued is a character from a previous book, and someone who is important to the main character.)

The main character joins the enemy.

An important character dies, but for a good cause . . .

10. Prompts for writing about yourself:

Your first love (not necessarily in a romantic sense).

An object you cannot live without.

The last thing you would ever do.

If you could go anywhere in the world, where/to whom would you go?

Describe your S/O (significant other) in a way to make me fall in love with him/her.

Describe yourself as an animal.

Your ultimate goal in life.

I’d been wanting to write something like this for a while, and I’m QUITE excited that I finally did it. Hopefully you find these prompts interesting and definitely not boring! See you in the next post!

2 thoughts on “100 Writing Prompts That Are Definitely Not Boring”